The CD is finished!

The new CD, Off Kilter, is finished and back from the duplicator.   The official release will be at the Metamora Old Time Music Festival, where I will be playing at 5:00 PM on the Wagon Stage on Saturday, September, 4.  Of course, if someone wants to buy one before then, I’ll be very happy to see that you get it. 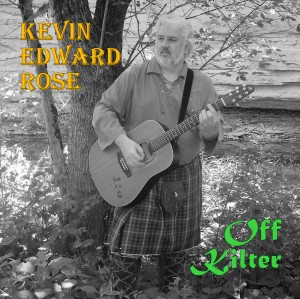 This Celtic-themed CD has thirteen songs, including one self-penned song called “Going Back to Avalon”.  I am very pleased with the final product and have already received some nice comments.

My daughter, AKA The Daughter Who Wishes to Remain Nameless, did the cover photography and  literally put blood, sweat, and tears into the project.  We live just a few hundred yards away from a picturesque gorge formed during the last major ice age.  I thought it would be a good place for the cover shoot, so I put on my kilt and off we went.  We went into a small woods and that’s when the bugs decided it was lunch time.

She had just begun taking the photos and the feast began.  She was wearing shorts and was bitten so badly that her legs were bleeding.  Sadly, I was so intent on getting the photos that I didn’t pay attention to her plight.   By the time we left, The Daughter Who Wishes to Remain Nameless was more than a little upset, and rightly so.  The bites were so bad that we eventually had to call the doctor for treatment.  Strangely, I wasn’t bitten once.

Fortunately, the bites are now healing and she’s talking to me again.  I haven’t figured out a way to ask her about doing the next photo shoot though.  Maybe I should wait until the scars are gone.

Posted under Life in General,Recording
Comments (1)

One Response to The CD is finished!